Day Three of DBlogWeek (by the way, I haven't said thank you to the lovely Karen Graffeo for starting this wonderful tradition, so thank you! Also, read all of today's posts here!) begins with a command to Clean It Out.

Yesterday we kept stuff in, so today let's clear stuff out.  What is in your diabetic closet that needs to be cleaned out?  This can be an actual physical belonging, or it can be something you're mentally or emotionally hanging on to.  Why are you keeping it and why do you need to get rid of it?  (Thank you Rick of RA Diabetes for this topic suggestion.)

My closet has been cleaned numerous times due to moving (from Toronto to Princeton to NYC to Toronto to elsewhere in Toronto), but there are still a number of things I should probably get rid of, including what’s left at my parents’ house, which was a bit of a shrine to old diabetes stuff. I think it’s been pruned, but there’s always more to purge.

Dear cluttered Self, here is a list of things you should get rid of:

Lancets from a meter that was obsolete by 1999. You know you could use them in a pinch, but at the rate you go through lancets, by the time you get to the bottom of the box, your blood sugar will be able to be checked by nanites.

Syringes and pen needles by the score. As clunky as the insulin pump can be, you’re probably not going back on MDI any time soon. A box of syringes for pump emergencies, though, should be kept. These you do wear out, if only because, when you keep one in your change purse, the numbers rub off the barrel (and you get some weird looks at the checkout counter).

An old, certainly expired half-bottle of Lantus that you’re hoping will work if you’re off traveling and your pump stops working. Girl, just ask for a prescription in case of emergency, or figure out something else. The only way that thing is going to help is as a talisman, like how taking an umbrella somehow prevents it from raining.

In a similar vein, Glucagon that expired in 2009. I know you’ve never had to use Glucagon in your eighteen years of diabetes, but get some new damn Glucagon. Make your family happy.

A Dex4 travel tube with two scraped-at, stuck GlucoLift tablets in it that you thought would fit because they looked approximately the same size. You are never going to get those out. You have tried fingernails, a knife, water, and everything else, and they are now gross, and apparently have the property that paper has when you fold it a bunch of times – you thought it would break easily, but now it’s impenetrable. You have replacement tubes. It’s not like you can get GlucoLift in Canada, anyway, so they’re just mocking you now. (Report: tube was turfed.)

Most of all, this is not in my closet, but all over my apartment, my purse, and everywhere I seem to go: test strip detritus. Pervasive, incorrigible, unstoppable, the discarded test strips line my path. I think I’m due for a strip purge, but like tribbles (The Trouble With Test Strips) they appear to multiply when I’m not looking. Case in point: this shoe was bought on Friday. This picture was taken on Saturday. Within 24 hours, a test strip mysteriously appeared. I have no reasons. I have no theories. I have no excuses. 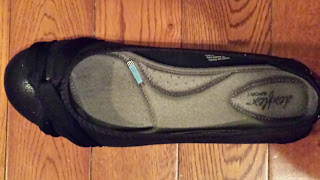