Just like in the movie, today we’re doing a swap. If you could switch chronic diseases, which one would you choose to deal with instead of diabetes? And while we’re considering other chronic conditions, do you think your participation in the DOC has affected how you treat friends and acquaintances with other medical conditions?

Today’s D-Blog Week prompt is all about “Trading Places” – if we could have a different chronic disease, other than diabetes, what would we switch to, and why? 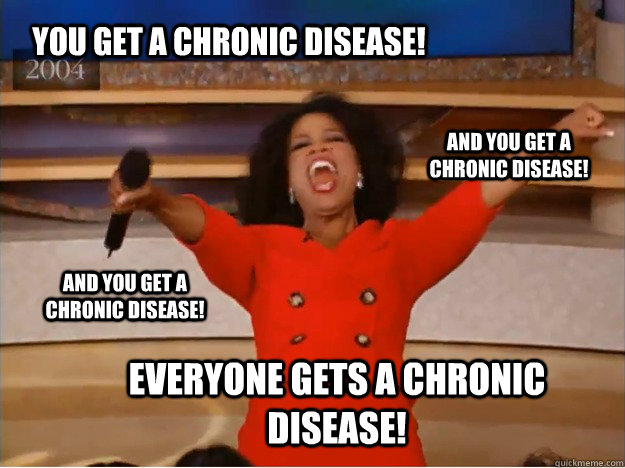 That’s why we have the term “co-morbidities,” because misery loves company.

In many ways, “choosing” a different chronic disease seems like minimizing someone’s pain; it’s almost mean. I know that if someone with another chronic illness said, “oh, I’d rather have Type 1 Diabetes; it seems easier than what I’ve got,” I might feel indignant and wounded. It’s that feeling when someone says, “at least you don’t have cancer.” I would never want to have cancer; it is an absolutely terrible scourge, and fuck it six ways from Sunday. However, the “at least” qualifier bothers me, because, again, it minimizes my condition’s impact on my life. I’ve written somewhat extensively on the cancer/diabetes dichotomy and why one is easier to receive sympathy and donations for; much of it has to do with, in my mind, the status of the chronic illness as an atypical, unpleasant and uninteresting progressive narration.

Cancer gives you a villain; it’s a life-or-death struggle, there are peaks, a climax, and the person is either hero or tragic victim at the end. Even with the idea of a possibly-ending remission, that’s just the set-up for the sequel; the “I Still Know What You Did Last Summer” villain popping up again.  Few chronic illnesses offer such a satisfying journey. This “cancer narrative,” while popular, is equally problematic for many people living with cancer, because it often casts them as victims when they don’t want to be. The concept that you “beat” or “lose” to cancer indicates a judgment on the person’s strength or strength of character; like a sport, a “loss” indicates that you just “didn’t want it enough,” which is maddeningly unfair and untrue.

That’s why I feel awkward and uncomfortable about choosing a disease instead of the one I have. My “grass is greener” is someone else’s “bête noir.”  However, if I had to pick, I would go for the one thing I have curiously never had: seasonal allergies (if that’s even considered a chronic illness).

My entire life, the one malady that has been curiously missing from my rap sheet is that of allergies. I am allergic to sulfa medication and nothing else. Twice, I have done a 60+-item scratch test at the dermatologist’s; twice, the only thing that has reacted has been the pure histamine control (so I really am skin reactive; I’m just allergic to nothing). Ironically, the one thing my skin is “allergic” to is being touched or scratched; I’m dermatographic (you can “write” on my skin and occasionally produce hives). So, just like everything else, my body isn’t rejecting outside stimuli; it’s rejecting myself, as usual. Stupid self-hate-filled body.

I realize that seasonal allergies can be a source of much consternation and misery (speaking to my cousin a few weekends ago confirms this). And I don’t want major food allergies; quite frankly, I’d rather be diabetic than be deathly allergic to some food that I had to avoid all restaurants for. But mild, recurring seasonal allergies that I can’t get rid of but goes away two weeks into spring? Sounds good to me.

This, of course, is cheating somewhat; I suppose an equal “chronic” illness should be something I have to deal with all the time, like what I have now. I guess it could be something that’s usually all right, but “flares” in nasty ways. But, I have to say, if it counts, give me a few weeks of seasonal allergies any year, over this. If seasonal allergies have a narrative, it’s that of a villain who comes back to make an impressive cameo over Sweeps Week, and then disappears for another year.

That, I could deal with.