January has been a month of ups and downs so far, and it's not even half over.  I began the month with a lovely New Year's party; it's been a tradition amongst my friends to have New Year's at the same house (ever since high school), and then more recently, to have a day of marathon TV or movies on a particular theme at a nearby house the next afternoon, after the night's party is over.  I was reluctant to go this year, because my beloved 21-year-old cat Pumpkin was not doing well, but I was happy to have been able to see and spend some time with her that day (I'd just gotten home from Florida) and was going to come home and spend with her whatever time she had left.

This year's marathon was of The Simpsons, and of course, we had all sorts of great episodes to choose from. The one that suddenly resonated with me this time, however, was the one where Marge becomes a cop, "The Springfield Connection." Yes, this is another moment where I connect pop culture with diabetes. Bear with me. I realized that the Springfield Police Department is my immune system, with Chief Wiggum in charge.

Marge, in her police training, is tested at a shooting range. Angry criminal cutouts pop up in windows, doors, on the street. It's her job to shoot the criminals, but in the meantime, innocent people are also popping up. There's a woman with a baby, a blind man with a cane and dog. Marge wisely avoids shooting these people. After she has done her job perfectly, Chief Wiggum strolls out to deliver her score. Clucking his tongue with shame, he says, "You missed the baby...you missed the blind man..." Yes, that's my immune system in a nutshell. Not content to kill the criminals floating around in my body, it goes after the baby and the blind man, innocent (organs) civilians. The corrupt police force (sucked in by the lure of counterfeit jeans, again happy doing the wrong thing) was a perfect encapsulation of my life, forcing my pancreas, a young go-getting official, to quit in disgust. Also appropriate is the moment when Marge walks into the station to declare her intentions of joining the force, only to be greeted by Wiggum's "What, what, what? This had better be about pizza." How sad my immune Wiggum would be to learn that, because of his ineptitude, it is substantially harder for me to eat pizza and not feel awful afterward as the pizza goes on the attack.

Amused by this comparison, I came home to some terrible news. While I was out, in the wee hours of the morning, Pumpkin had taken a severe turn for the worse. My parents rushed her to the vet, and had been told to let her go. My cat was gone. She had lived just long enough for me to come home, pet her for hours and tell her I loved her, and fifteen hours later, she died. I was glad that I'd had a chance to say goodbye, but I'm still unhappy with myself for not being there at the very end.

This is a diabetes blog, so I don't want to dwell too much on unrelated topics, and I don't think I could ever properly eulogize her, but Pumpkin was one of the few things in my life that had been constant since way BD (before diabetes). She came in to my life when I was six, six whole years before diabetes became my reality. I am angry that my diabetes is still here, while she is not. Not only was she the most beautiful cat who ever lived (and I'll prove that with a recent picture, still gorgeous at twenty-one), but she was loyal, loving, whip-smart (she was always trying to figure out how things worked, and I once taught her to turn off the light switch by putting a knitted hairband over the switch; she would jump up and turn the light off), and true. In many ways, her passing symbolizes the final iron door slamming shut on my childhood, which should have probably happened many years ago, but that probably makes it more painful rather than less. One of my friends described her as having "an unfearful symmetry," which I loved. Her face was exactly half-orange, half-black, right down the middle; the most striking cat I have ever seen in my life.  All of my friends who have lived in Toronto remember her; we grew up together. There are really only a couple of friends who I can say I've known as long as I knew her, and really only one who wasn't a relative. 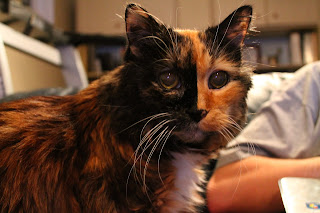 I remember going on a "mystery trip," as my parents called it, the day we got her and her sister (who predeceased her a few years before). I walked into the barn, up into the hayloft, to see three kittens; a grey boy and two calico girls. My parents explained that the kittens' mother had been kicked by a horse and had to be put down, and would I like to take two of the three kittens? (Someone else would take the third.) It was my dream, as a small child, to own a kitten, and with the sudden prospect of two I was giddy with glee. I took the two calicos because they were snuggled up together, they were practically twins, and they seemed like they needed each other. As an only child, it was intriguing to me to see this matched pair.  Through the years they were my constant companions, and I loved them both, but Pumpkin was special and "my" cat from the start. She always knew when to come comfort me when I was upset. Maybe that's why, almost two weeks past, the wound is still fresh, because she's not there.

I still think I hear her or that I should let her in, because she's clearly just outside. In her later years, she developed the trick of getting more food by going outside for thirty seconds, and then returning and letting us know she had been outside, so that meant time had passed. My parents' bedroom door was never closed at night for twenty-one years because she always slept inside, snoring in the cutest way possible, and would beat on the door like a battering ram if it was closed. I went to bed late the evening of the first (had trouble sleeping for a week and a half), saw the closed door for the first time, and cried my eyes out. 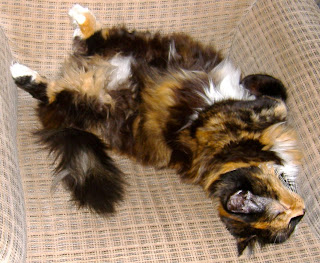 Pumpkin loved to eat flowers. When I was a child, I thought I would circumvent this desire of hers by making my mother paper flowers, which were put in a vase on the dining room table. When I came back into the room, she was up on the table eating the paper flowers; I still treasure the incriminating photo of this I snapped. Later in life, she would continue being strange about paper, carrying around wadded up Kleenex and howling while depositing them in a neat line down the hallway. I often wondered if this was due to her missing her sister, an odd grieving ritual.

I have all sorts of stories about Pumpkin, but I can't go on forever here, though I would like to. She was my best kitty friend, almost a twin but one of a kind. All I am left with are my own grieving rituals.

Dan and I walked home late on the night of the 2nd in the middle of a snowstorm. It was very quiet and snow was rapidly accumulating under our feet as the flakes lightly touched our faces and melted. The atmosphere was reverent, full of hushed beauty. As we walked up the driveway, I noticed a set of tiny animal footprints that had been left before we arrived. Cat footprints. The footprints walked up to our door and then disappeared.

I am a rational and scientific person. I do not believe in spirits, God, the afterlife, ghosts, or anything like this. I know that whatever animal was walking across the driveway probably disappeared into the bushes at the side of the house.

But in that moment, every fiber of my being wanted to believe that Pumpkin's spirit had found its way home, to the house she had spent every night but five (Pumpkin's Great Adventure, being spayed, foot surgery, infection recovery) of her more than twenty-one years.

This blog turned out very differently than I expected, and I'm going to have to write about the start to the semester and a particularly scary low in another post. But I guess I still wanted to say goodbye, and thank you. 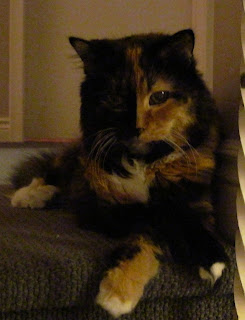